When I was in college my advertising professor espoused this gem: “Never distort the human face in an ad…it freaks people out and won’t do anything good for your brand.”

I like to believe this was a lesson hard learned from years of agencies using clowns in their ads. Thinking they were employing a light-hearted, fun mascot to sell their products, instead the Admen found they were spooking their would-be clients!

“Say, Hank, our new ads aren’t working as well as as we predicted.  Do you have any thoughts on this?” 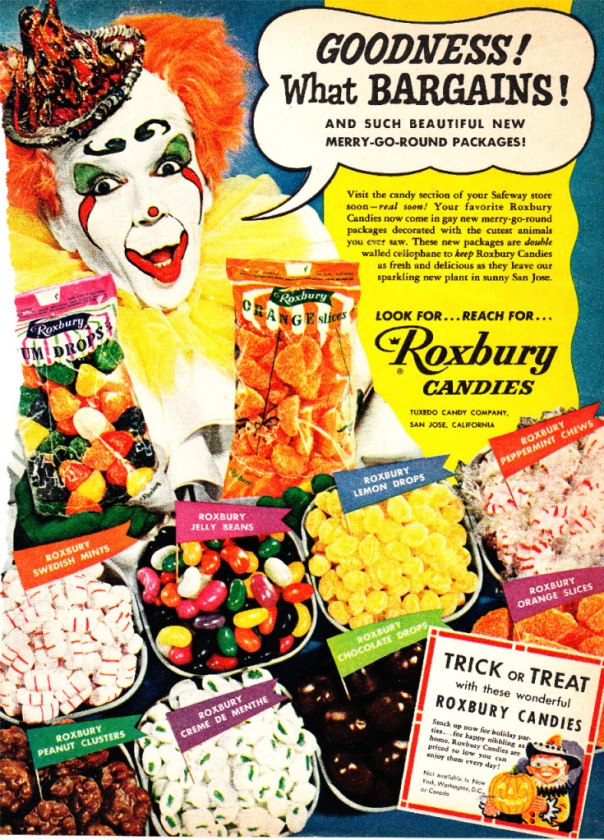 There isn’t any use in denying it, clowns freak folks out. But why?

Once again, the crack research team at Aunt Mary Industries was on the case.*

Turns out, our discomfort could be thanks to everyone’s favorite “I’m trying to sound smart” topic of conversation: the uncanny valley. The theory of the uncanny valley is objects that appear to look human, but just miss the mark, create an uneasy feeling in people. It turns out we are really good at sussing out tiny, non-verbal signals and if something we are beholding is not quite right, it results in a eerie, uncomfortable vibe. This is typically noted in human-like robots and early motion capture animation. You know how every Christmas you shrink back from the odd faces of Polar Express? That’s uncanny valley! 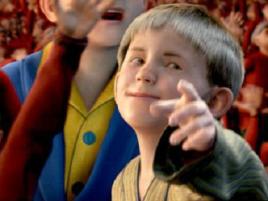 While clowns are (supposedly) human, the unchanging, made-up expression is likely what gives us the heebie-jeebies. As humans heavily rely on our vision for information about our environment, we glean a lot of clues from the facial expressions of those we interact with.  The baked-in smile of a clown unnerves us as something not quite on the up and up.

Now that we know the why, let’s get some more of the what: (I was going to make a clown car reference here, but I’m trying to be above such things) 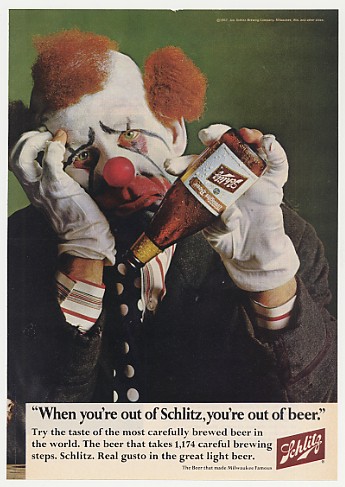 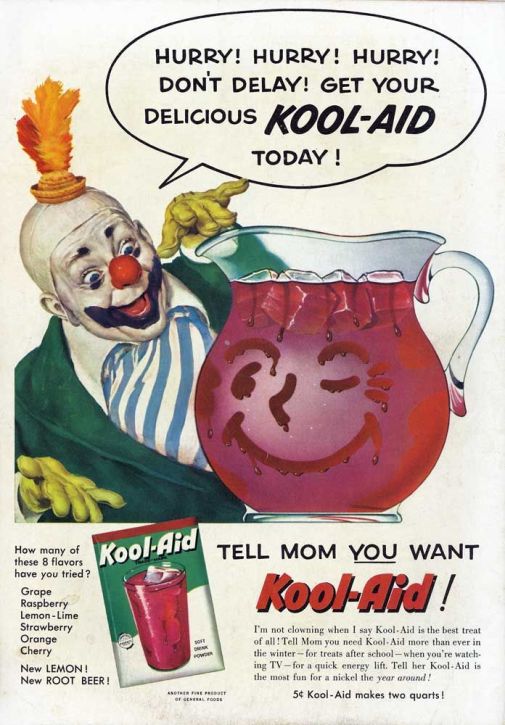 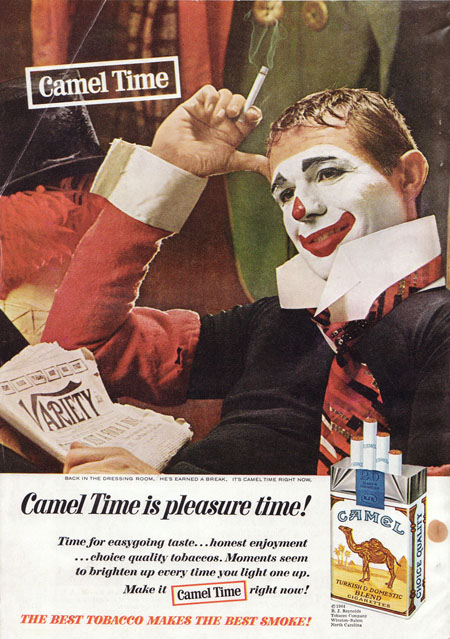 Kool-Aid Man’s usually welcoming and friendly wink takes on a slightly sinister tone in this ad. “Oh NO! This masked and apparently unhinged person didn’t put anything into your beverage. No, I’m not sweating…(wink)”

Hey there, sexy clown man!  Was Camel testing the idea that anyone looks cooler when smoking?

This ad alone could create a mandela effect that Ted Bundy went to clown college. 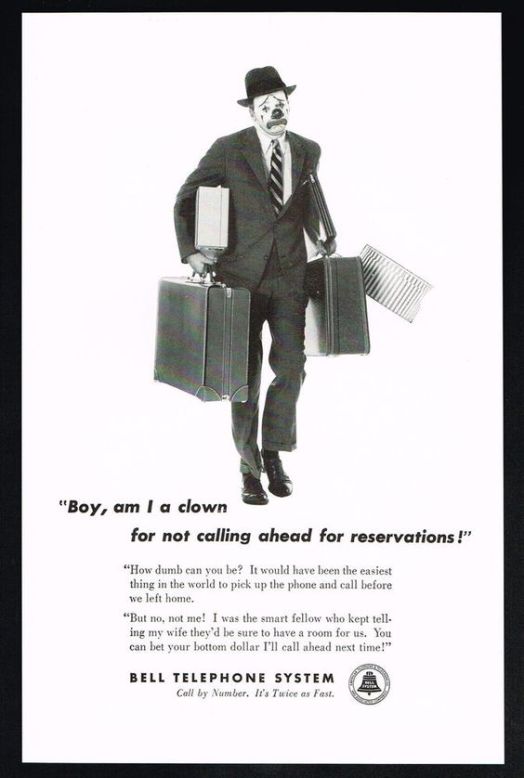 When ICP’s Management team checks in while touring.  Nothing like the open road to make you rethink your life’s choices, huh, Frank?

*Research Team is me + google

In 1912 Clarence Birdseye, taxidermist and naturalist, was working in Labrador, Canada, enjoying the temperate climate of -40 degrees Fahrenheit. Birdseye took to ice fishing and discovered the fish he caught froze almost instantly as it hit the frigid air. What’s more, when thawed, the fish tasted fresh! Clarence learned this flash freezing created small ice crystals which preserved the meat without destroying the cells. This was a far cry better than contemporary freezing methods that were costly and left frozen foods mealy and unappetizing.

Birdseye, back at home in New York City, went to work to recreate this flash freezing process. In 1927 he applied for a patent for a new food freezing machine and soon after got to selling his new and improved frozen foods.

What seems crazy to our modern palate is that, at the time, frozen food was seen as a posh culinary choice. The 1920’s and ‘30’s hostesses proudly announced to her guests she was serving frozen foods at her dinner party. At the time, only those who could afford freezers could store the products which also cost more due to the needed temperature control from production to travel to storage in local shops. Birdseye began leasing grocery stores special freezers to display his products. All this lead to frozen fish and veggies being seen as fine dining.

Birdseye’s companies started advertising “June peas as gloriously green as any you will see next summer” which seems a tad lengthy, though totally delightful. 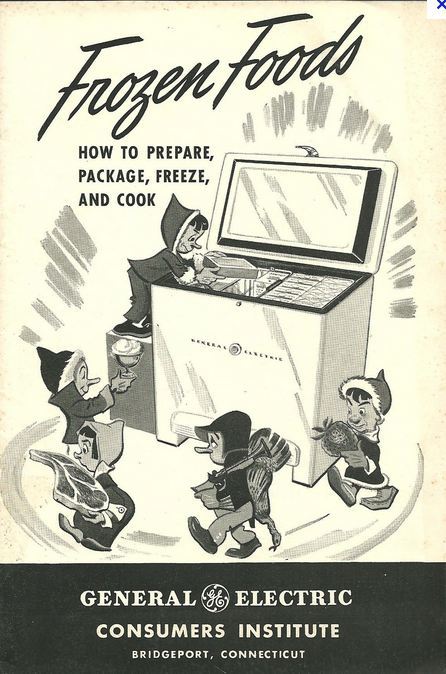 In the 1950s, Birds Eye, now owned by General Foods, introduced its popular slogan, “Sweet as the moment when the pod went POP” 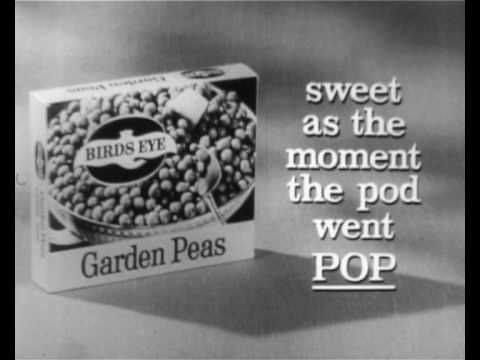 In 1969, Birds Eye made history as it aired the first color TV commercial to run in the U.K., showcasing those peas in all their technicolor glory.

And, because we all love those vintage food ads, here you go: 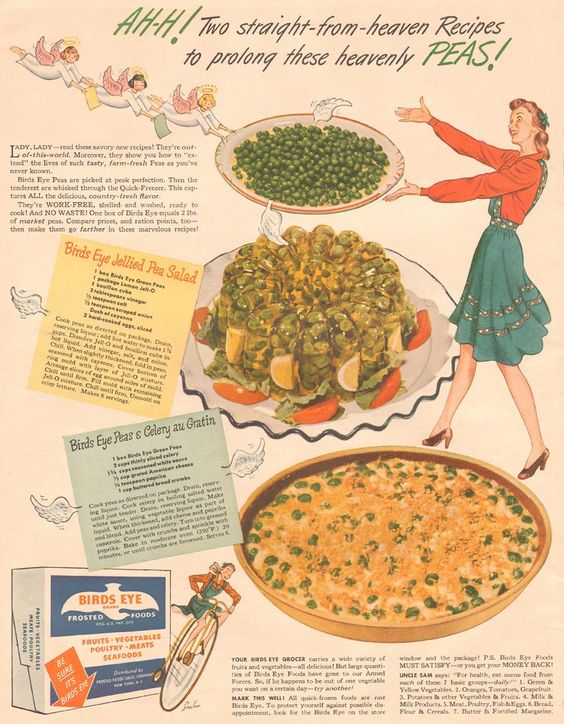 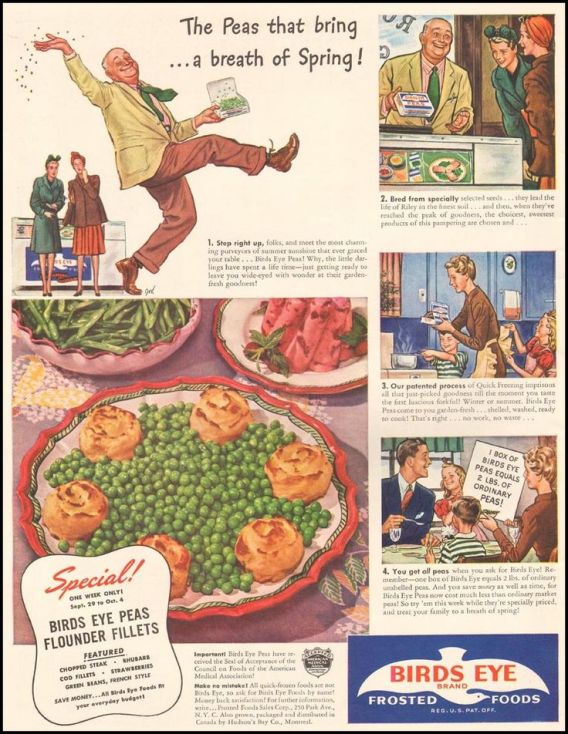 Kids, the Storytime is a space that welcomes all faiths! Reasonable minds can agree that great ads are here for everyone to enjoy, no matter what day, if any, you set aside to ponder the mysteries of life.

It’s been said that if folks could just break bread together there would be a lot less misunderstand in the world, but that leads to another problem…what to serve? With many creeds’ dietary restrictions this is no easy feat.

Good News! The Aussies have figured it out; lamb is the answer! No beef? No pork? No problem! (You vegetarians can fill up on sides)

The PR ad shows divine figures at a dinner party, mingling with mortals and joking around. Finally they realize that lamb is the one meat they can all agree on. The commercial is fun but at the same time respectful, though there is a slight poke at Scientology. I especially like the appearance by a Jedi.

Still, not everyone’s a fan. The Australian Hindu community has taken issue with the image of Ganesha seemingly drinking wine and eating meat, which are no-nos.

The commercial runs a little long, clocking in at well over two minutes, but the in-joke gags give it remarkable rewatchability.

Evidently, whatever the Aussies are selling, Aunt Mary is buying. I must be a sucker for that dreamy accent.

Happy Memorial Day weekend in the US! As the unofficial start of summer there is one thing everyone wants to do: Grill Out! Let’s see what’s on our vintage ad picnic menu, shall we?

First up: hot dogs! So convenient in a can! I can see thousands of cold-war era backyard bomb shelters stuffed to the rafters with cans and cans of wieners. Why, the nuclear winter will seem like a picnic with all those hot dogs!

Or maybe we can tempt you with a hamburger, fresh from the tin?

Let’s not forget the condiments! What’s a picnic without ketchup?

Or folks losing their minds over mustard?

…and to wash it all down?

Many wishes for a happy and peaceful Memorial Day!

Gather ’round, Mature Adults, for another moment in Aunt Mary’s Advertising Storytime! Fluff the cushions on the fainting couch and prepare to clutch your pearls, because we are about to get personal.

From roughly the turn of the century to the 1960’s the makers of Lysol touted their product to not only clean your house, but to also save your marriage.

Ladies, are you having issues with your husband? Is he staying out too late? Withholding affection? Perhaps that last pregnancy made him a bit jumpy? Lysol is here to help! Not only does it clean your sinks, but is the key to marital harmony if used as a feminine douche. (I’ll let you take a moment to breath through that)

Yes. The folks behind Lysol told women that the problems in their relationships are likely due to pregnancy and/or the crotch rot. The language used in the ads was a brilliant combination of negging and subtext. Evidently everybody knew the term “feminine hygiene” meant birth control, but thanks to strict moral laws prohibiting even the discussion of contraception, they couldn’t just come out and say it, but boy howdy did they get close! 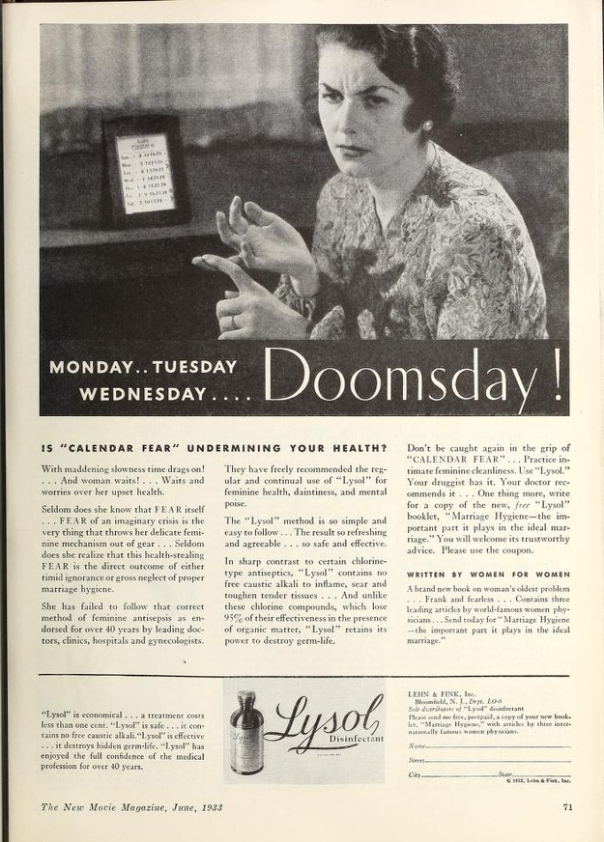 Forget that most of these men were suffering from shell shock due to two world wars and a crippling economic depression. You are obviously the problem and if you really cared you would hose acid where the sun don’t shine.

The makers put out years of print ads encouraging women to use it as a spermicide, and (in my opinion) a combat to STIs. This practice was likely worse than nothing. Used as a contraceptive it was useless and obviously also harmed women’s bodies. 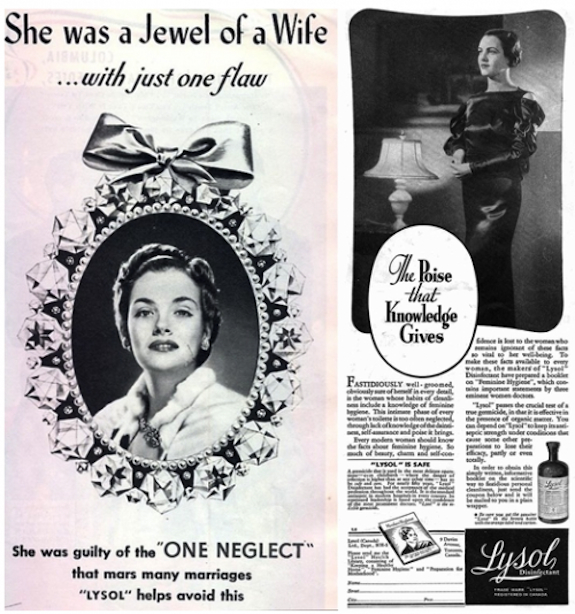 It all ended when the pill came out.

It may be one of the most hackneyed phrases in our culture, spouted off when someone hands over a 6-pack of beer or the topic of herpes comes up: Yep, It’s the gift that keeps on giving!

But where did this slogan come from? It’s a new year and Aunt Mary is in a giving mood, so let’s roll!

“The gift that keeps on giving” was first seen as a tagline in a print ad for Victor “talking machines” (AKA Victrola or Phonograph) in 1925 and was registered as a trademark in 1927. 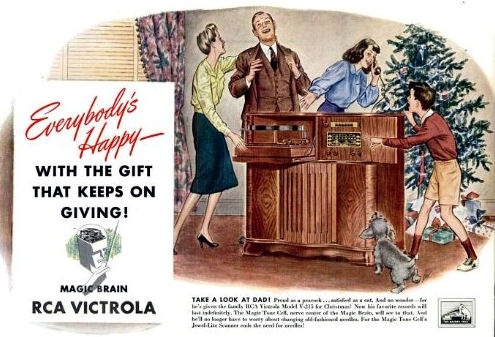 Victor was the leader in the emerging home-entertainment business from its incorporation in 1901. Not only did Victor make the machines that play music, it also sold the records that were made through a proprietary technique. Additionally, Victor made exclusive deals with the most famous musicians pressing special “Red Seal” albums. Not only did this improve sales, but it  also created a “third party endorsement” hinting that the musicians trusted Victor alone to record their music with quality and high standards.

RCA bought controlling interest in Victor in 1926 and continued using the slogan in advertisements for radios and record players for decades after. 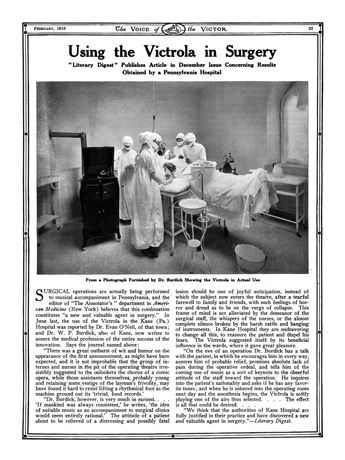 The tagline has since been used in dozens of campaigns, including ads for blood and organ donation and subscriptions to Sports Illustrated Magazine.

Be sure to contact me with suggestions or questions. Let me know about your favorite and least ads!

Aunt Mary loves when advertising is in the news. People talking about commercials? Heck yeah! So, I would like to extend my hearty thanks to Wells Fargo for stepping in it something huge this week.

In case you missed it, the venerable finance company put out an ad that seemingly implied that STEM (Science, Technology, Engineering and Math) careers are superior to those in the arts. 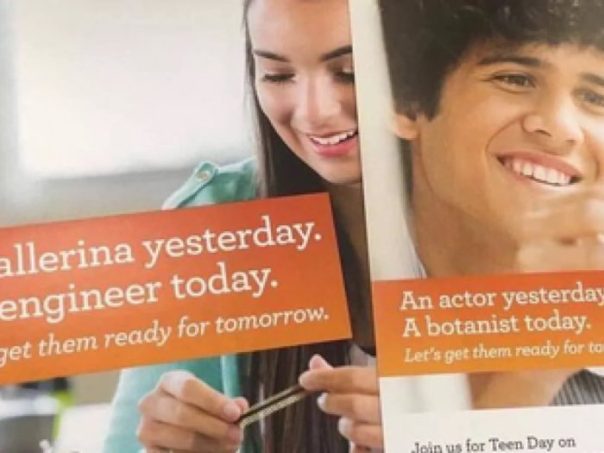 Predictably, folks lost their collective cool and took to their twitters to give a thorough helping of what-for.

It seems folks don’t care for being insulted by a group that wants their money!

Setting aside the vital social need for fine and preforming artists, businesses need artists as well. “Creative Types” are the people who spread the word and garner interest for products and services in the form of web and graphic design, copy writers, advertising, package design and display creation. Artists are designing greeting cards, wrapping paper, fabrics and housegoods! I know somebody whose job is to design the carpet for hotels and casinos.

Furthermore, we need to set aside this idea that creative work doesn’t pay. I have numerous friends who support themselves by their artistic talents including work in fine arts, comic books, music and clothing design as well as teaching. Last time I checked, their money bought craft beer and brownies too.

I must also add that it seems a little wrong for them to be ripping on actors since there is an entire song about Wells Fargo Wagon in a famous play! Didn’t think about how’d that looked, did ya, W.F?

It appears that Wells Fargo has moved on to a bigger mess (in the form of allegations of customer fraud) so the least of their worries is a botched PR campaign. I sure hope someone comes up with a creative idea to help them!