Today at the Storytime we are going to have a special talk for the Admen! Squeeze in tight so everybody can fit, there’s room for everyone at Aunt Mary’s!

Guys, I understand you are under a lot of pressure. Your creations have the ability to last forever now thanks to the internet and I’m betting your clients are asking the impossible from you. I’m sure they want an iconic campaign that reaches every target market and spans different media all while sticking to a tight budget. I’m guessing you got to hear all about your client’s neighbor’s nephew who is just a wiz with that social media stuff.

I really feel for you. It’s hard. But I wanted to give one small, gentle piece of advice from someone who loves advertising:

STOP FEATURING JACKASSES IN YOUR ADS! 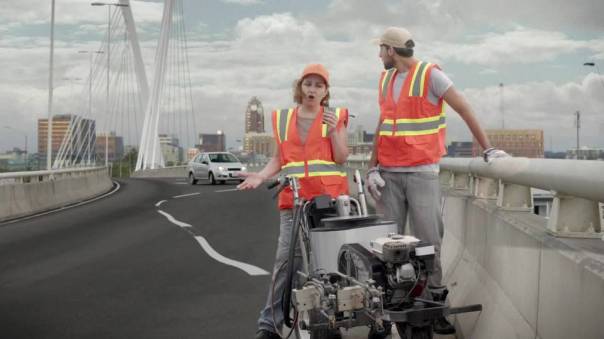 Yes, I get it, assholes are really in vogue right now. We might even we living in the golden age of the Jerk-Almighty.  But here’s the thing: nobody wants to buy stuff from a jackass.

Currently the biggest knuckleheads in my book are the folks in the campaign for Milky Way candy bars. These commercials feature workers accomplishing terrible results at their jobs (misspelled tattoos, poorly painted street markings, hair burnt off client’s head) and when called on their poor work retort with an eye roll and snotty “Sorry… I was eating a Milky Way” not unlike a spoiled valley girl who was caught in her parents liquor cabinet.

My best guess is they were trying to edge in on Snickers brilliant “You’re Not You When You’re Hungry” campaign, but just not hitting the mark. The characters are rude and dismissive and truthfully not anyone I would want associated with my brand. I suppose a case could be made that the candy bars are so on point your forget about everything else…but I’m not buying it.

What’s more, none of these incidents are particularly creative. Misspelled tattoos happen and the “No Regerts” tattoo was featured in the movie “We’re the Millers.” Especially eyebrow raising is the cruise ship scenario which hits a little too close to the 2012 crash of the Costa Concordia in Italy which resulted in the death of 32 people. Not  exactly a gold mine of hilarious content.

We’ve talked about the choice of weird spokespeople before in the Liberty Mutual ads, making me wonder if the anti-hero is a trend with some legs.

But, Aunt Mary must give credit when due, I have to admit I find the print ads for this campaign creative and attractive, even though the sentiment is the same. Perhaps the stylized cartoon imagery makes it a little less dismissive? hmm…

Kids, the Storytime is a space that welcomes all faiths! Reasonable minds can agree that great ads are here for everyone to enjoy, no matter what day, if any, you set aside to ponder the mysteries of life.

It’s been said that if folks could just break bread together there would be a lot less misunderstand in the world, but that leads to another problem…what to serve? With many creeds’ dietary restrictions this is no easy feat.

Good News! The Aussies have figured it out; lamb is the answer! No beef? No pork? No problem! (You vegetarians can fill up on sides)

The PR ad shows divine figures at a dinner party, mingling with mortals and joking around. Finally they realize that lamb is the one meat they can all agree on. The commercial is fun but at the same time respectful, though there is a slight poke at Scientology. I especially like the appearance by a Jedi.

Still, not everyone’s a fan. The Australian Hindu community has taken issue with the image of Ganesha seemingly drinking wine and eating meat, which are no-nos.

The commercial runs a little long, clocking in at well over two minutes, but the in-joke gags give it remarkable rewatchability.

Evidently, whatever the Aussies are selling, Aunt Mary is buying. I must be a sucker for that dreamy accent.

You guys, “It’s the Great Pumpkin Charlie Brown” is on TONIGHT! What’s more, this is 50th anniversary and I’m totally geeking out. I love “Great Pumpkin.” It’s sweet and classic and they say “tricks or treats.” But there is another reason why I’m so fond of the show, watching “Great Pumpkin” is where I realized that maybe I enjoyed advertising more than the average kid.

You see, for me Peanuts holiday specials and their years-long sponsor, Dolly Madison, (makers of fine snack cakes) are inextricably linked. 1980’s Aunt Mary greeted the Dolly Madison ads as a welcome part of the show, an old friend that was as much a part of the tradition as every pumpkin in the patch or ghost costume.  Even now when I watch a Peanuts show I have a deep sadness that they no longer run the sponsor card for Dolly Madison. “Can’t they just add it in for nostalgia’s sake?” I think, even though I know they can’t.

When “Great Pumpkin” first aired in the 1960’s, the opening sequence included a shout-out to their sponsors. The nod was edited out for later viewings, though Dolly Madison continued sponsoring the show into the 1980’s.

Dolly Madison used the Peanuts characters in their advertising and packaging from the 1960’s through the 1980’s. Hostess, makers of Dolly Madison cakes, announced plans to stop producing snack cakes in 2012, though subsequent communication indicated a plan to relaunch in the future.

Happy watching! May your pumpkin patch be sincere and your rock treats be few.

There are some truths in this world.

That person in front of you at the grocery store self check out? They have no clue what the’re doing.

Anything that has a dog in it is probably going to make you cry.

Being a dog lover, I was happy with Subaru’s addition of adorable dogs in their commercials.

Whatcha up to, Dog?

And then I realized the dog in this commercial is dying.

The list of happy dog activities, the owner’s look of enduring love and knowing grief, the dog’s joy…

And yet, I can’t hate this ad.

An estimated 65% of Subaru drivers are pet owners and Subaru has brilliantly curated their advertising to this niche market. From this mensch of a guy treating his dog to one last road trip, to fleshing out the shower thought of “where would my dog go if he could drive himself” campaign, they really have figured out how to speak to the dog lover’s spirit in a respectful and knowing way.

That is the key to good advertising, find out who your potential customers are, figure out what they value and tell them you get it and this is how your product fits in with their life.

Now, if you will excuse me

At some point in the 1950’s, an exasperated marketing exec in Battle Creek said “I don’t know. Make the mascot a giant Scotsman?” and OKs cereal’s Big Otis was born.

I get it, oats, oatmeal, Scotland. Sure. Why not? How else was Kellogg’s going to elbow in on that smug Cheerios? What kid doesn’t love a burly, bearded man in ethnic garb telling them what to eat? It’s like we’re printing money, baby!

Big Otis spent two years basking in the cereal mascot sun before he was replaced with Yogi Bear in 1962. In 1963 OK’s was scraped in favor of Fruit Loops. It was grand while it lasted, wasn’t it, Laddie?

Thanks to Dan for suggesting today’s topic! Let me know if you have an idea for the Ad Storytime!

Aunt Mary’s here to help you make small talk at your next cocktail party or awkward family dinner! Instead of politics or Game of Thrones, fill that weird dead air with this little tidbit: Hey! Did you know the “Sunday Sunday Sunday!” from those old school Monster Truck ads actually had a purpose?

That, ma’ friends, is called an icebreaker.

Jan Gabriel was the voice of auto racing (and later Monster Truck) radio and TV ads from the late 1960’s to the 1980’s and the originator of everybody’s favorite cliche tag line. He had been working as a motor sport track announcer in the Chicago area when the US 30 dragstrip in Hobart Indiana wanted to get the word out that they were open on (wait for it) Sunday. Gabriel believed the announcer was part of the show and he was sick and tired of boring announcers. His signature style was enthusiastic and loud. When the US 30 track owners needed a unique sound for their radio ads, Gabriel stepped up.

The copy for the ads was dense with a lot of information to cram into a 1 minute radio spot. At the time, commercials were recorded on tape in one take. There was no editing. The announcer had to get it right and any mistakes or running long meant starting over. Gabriel made it work, including the needed Sunday Sunday Sunday!” the advertisers demanded. They were determined to let folks know they were all about exciting family fun on SUNDAY! Originally, it was thought two voices would be needed to get the Sundays in, but Gabriel managed it on his own.

The ideas behind the Sundays is this:

First Sunday is to inform. (Wait, When?)

Second Sunday is to confirm. (I’m free! I could go to that!)

Third Sunday is to excite. (This is going to be awesome!)

Later, Gabriel had a syndicated TV program The Super Chargers Show, which is credited with bringing NASCAR to TV and Monster Trucks into 1980’s popular culture.

Let’s be clear, this is an ad trying to get you to buy a soft drink.

It’s also an ad with a message of hope and reaching out to other people in the spirit of friendship and caring.

As we mourn the loss of so many in the past days to senseless violence, let us vow to do what we can to help each other. To erase the “us vs them” mentality from our hearts and minds.  To live with charity, positive action and kindness. To never, ever NOT EVER read the comment section of a news article.

So gather ’round kids, because we are all in this together. We can be better.

Administrative notes: This ad is called “Hilltop” and first aired in 1971. It was reprise for the 1991 Super Bowl with the original singers being joined by their children. It is considered by we ad nerds to be one of the best commercials ever created and Don Draper of Mad Men had no part in its development.